Genomic in balances are a major cause for congenital and developmental abnormalities. These inbalances can be analysed using traditional techniques – the conventional karyotype – or more advanced technologies – the high resolution molecular karyotype based on microarray technology.
MORE ABOUT THIS

What is a chromosome?

All human cells hold in their nucleus the genetic information in charge for the operation of the entire body. Such information is contained in the nuclear DNA; the DNA molecule in the nucleus is wrapped in microscopic structures called chromosomes. Chromosomes are not visible until the cells start dividing.During the cell division stage called metaphase, the chromosomes get more compact and can be seen using the optical microscope. Each chromosome has a constriction point called centromere, which provides the chromosome with a specific shape, by dividing it into two sections, or ends: a short end noted “p” and a long end noted as „q”.

Every individual has 46 chromosomes (23 pairs) in the nucleus of somatic cells. Each pair is constituted of a chromosome inherited from the father and one from the mother.

What is a chromosome abnormality?

Any change in the normal number or in the unique structure of chromosomes is considered an abnormality and may cause a genetic disorder.

Such changes can occur during the egg or the sperm cell formation, after the formation of the zygote (first cell of the embrio, after the egg and sperm cell fuse) or during an individual’s lifetime.

Inherited abnormalities come from a parent who may or may not have symptoms, and who produces genetically unstable gametes (sperms or eggs), which may cause a genetic condition if they are transmitted to the offspring. After the chromosomally abnormal gamete fuses with a normal one, a genetically abnormal zygote appears. The consequences are highly variable and can include failed fertilization, spontaneous abortion, perinatal death, congenital malformations, growth issues, intellectual disability,infertility.

Somatic abnormalities occur during an individual’s lifetime and can cause various types of cancers.

Chromosome abnormalities are divided into two groups: numerical and structural

Any change of the number of chromosomes is defined as a numerical abnormality (or aneuploidy) and it can either be inherited from a carrier parent, or occur “de novo” as a result of non-disjunction (lack of chromosome separation) which may occur during meiosis or mitosis.

Such abnormalities can be identified by genetic cytogenetic or molecular tests and, in most cases, they are non-viable.

In certain cases, numeric abnormalities do not occur in all the cells. An individual may therefore have two or several cell lines with a different number of chromosomes. This phenomenon is called mosaicism.

Structural abnormalities occur when one or several chromosomes have a change in their normal structure, that ca can be either inherited from one of the parents or”de novo”.

These abnormalities can also be transmitted to the individual’s children and cause disease.

The effects of structural abnormalities depend on their type, size and location.

Structural abnormalities can be identified through prenatal or postnatal cytogenetic testingand they can be:

How can we study chromosome abnormalities?

The karyotype analysis can detect all numerical abnormalities and structural abnormalities larger than 5 Mb. Moreover, conventional karyotype is the only genetic diagnosis method able to detect balanced chromosomal changes such as translocations.

Recommendations for having a Cytogenetic test done

For newborns, children, and adults:

The Affymetrix SNP microarray platform is the most advanced technology for analysing the whole genome to detect submicroscopic chromosomal abnormalities..

SNPmicroarray is a technology which helps analyze unbalanced chromosomal changes called Copy Number Variants (CNVs) smaller than those that can be detected using the conventional karyotype. 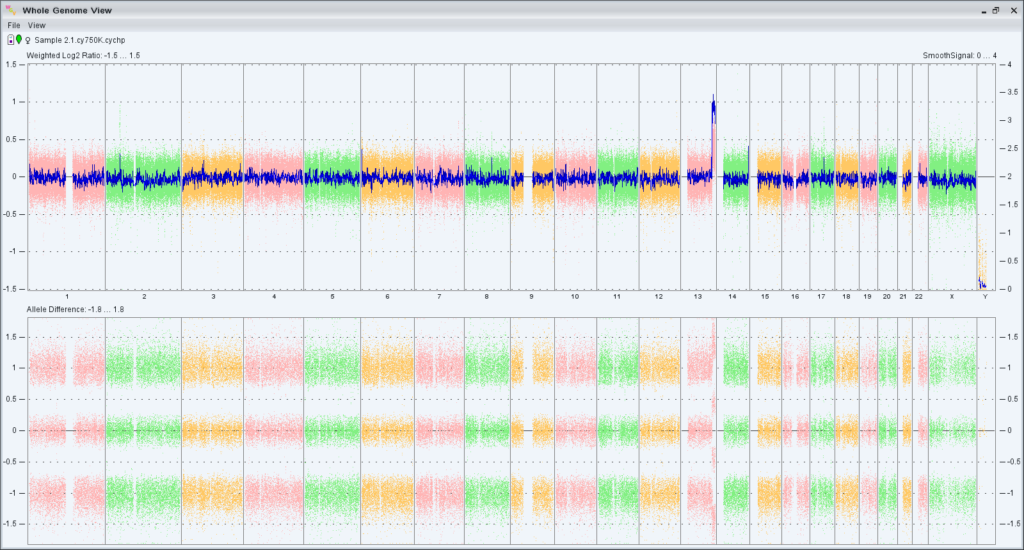 What are the benefits of SNP-microarray testing vs. conventional karyotype?

Just like the conventional karyotype, SNP-microarray explores all the 46 chromosomes in a single test.

Unlike the conventional karyotype, it can identify very small CNVs,thus significantly increasing the detection rate of genetic abnormalities.
An accurate genetic diagnosis provides an accurate and complete clinical picture of the disease and ensures the best patient management. 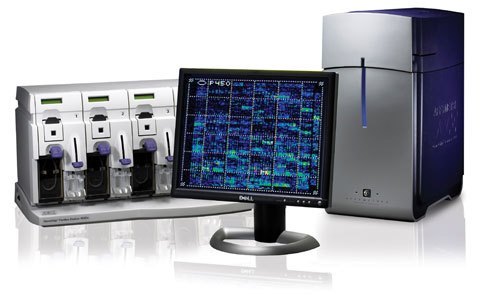 When is it recommended to have the SNP-microarray test done?